Get in touch with Mosquito Abatement Staff

Facts about Mosquitos and control

A division of Public Works Dept.

The Bannock County Mosquito Abatement District will be conducting surveillance and trapping to determine fogging applications throughout the County this summer. Fogging applications help control adult mosquito populations and the transmission of disease.

… is to help protect the citizens that live within the Bannock County Mosquito Abatement District boundaries from disease-carrying mosquitoes such as the Culex species, which is the primary vector for the West Nile Virus, to improve the quality of life for District constituents by managing mosquito populations to prevent a nuisance and or economic loss to areas of the district, and to help protect District animal and livestock populations from mosquito-borne disease or parasites.

Although we try to follow a general schedule to effectively cover all areas of the District, sometimes an adjustment is necessary to address a large hatch-off or infestation. Service Requests from County residents also impact the treatment program schedule. Weather and other environmental conditions play a very important role when determining whether or not to fog.

Although we try to follow a general schedule to effectively cover all areas of the District, sometimes an adjustment is necessary to address a large hatch-off or infestation.  Service Requests from County residents also impact the treatment program schedule.  Weather and other environmental conditions play a very important role when determining whether or not to fog.

These mosquitoes love to breed in stagnant water.  They over-winter as eggs and West Nile Virus remains viable to be passed on when the mosquitoes hatch in the spring. Get more info on http://mosquitocontrolfacts.com/.

Did You Know?
There are over 3000 species of mosquitoes.  Fourteen species have been identified in Bannock County.

We work hard to keep our District residents as safe as possible from the threat of mosquitoes and West Nile Virus. It is a constant battle, but you can help!

WHAT IS ZIKA VIRUS AND HOW DOES IT SPREAD?

Zika virus (ZIKV) was first discovered in 1947 in the Zika Forest of Uganda. Shortly thereafter, it was isolated from mosquitoes and then humans in 1968. ZIKV is a flavivirus similar to yellow fever, dengue, Japanese encephalitis, and West Nile virus. Prior to 2007, it had only been detected in central Africa and throughout southeast Asia. However, in 2007, it was associated with a disease outbreak on Yap Island in the south Pacific, representing the first time it had spread outside of
Asia. From there, it spread to South America with human cases first reported in 2014. Zika is a virus transmitted by the bite of the mosquito to humans and from human to human. Only 1 in 5 people infected with Zika will show symptoms. Zika has been linked to microcephaly in babies who contracted the virus from their mothers while pregnant. The CDC is also investigating a correlation of Zika with Guillain-Barré syndrome, an uncommon sickness of the nervous system.

ZIKV is transmitted by Aedes mosquitoes. In the Americas, it has only been linked to transmission by Aedes aegypti. Ae. aegypti is also responsible for the transmission of dengue virus, yellow fever virus,
and chikungunya virus. Recently in Africa, the virus was detected in Aedes albopictus, or the Asian tiger mosquito; hence, it is likely that Ae. albopictus could vector the virus in the Americas. 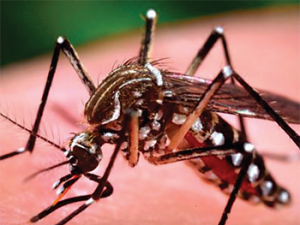