The Bannock County Sheriff’s Office, in cooperation with the Bannock Humane Society, is reminding the public to remain vigilant as the weather warms up and more people use area trails for dog-walking.

There have been no further reports of hotdogs laced with ibuprofen on area trails in recent weeks. However, there have been reports of similar instances in Jackson Hole, Boise, and Montana.

“We can’t be sure that the person or people leaving these hotdogs won’t do it again, so we’re encouraging trail users to not let their guard down this spring,” said Sgt. Jon Everson with the Bannock County Sheriff’s Office. 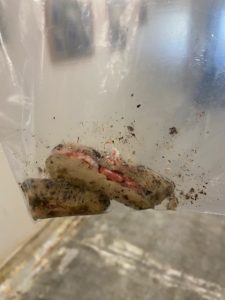 An example of a hotdog laced with ibuprofen left at a trailhead in Bannock County.

If a dog ingests ibuprofen, it can cause kidney failure or even death. According to the Bannock Humane Society, symptoms of ibuprofen toxicity in a dog may include not eating, vomiting, black tarry stools, abdominal pain, weakness, lethargy, increased thirst, and increased urination.

“We at the Bannock Humane Society are always concerned when we hear of issues and problems with animals in our home community,” said Danie Lewis-Ekstrom, President of the Bannock Humane Society. “The recent, unresolved problem of someone (or some people) leaving Ibuprofen-laced hotdogs along local hiking/biking nature trailheads leaves us worried.”

The investigation is ongoing, and the Sheriff’s Office is still accepting tips from the public.

“We’re doing everything we can to find who is responsible for these cruel acts, but we can’t be everywhere at all times. That’s where we need the public’s help,” Sgt. Everson said.

Investigators are asking the public to: