Thanks to a generous donation from the Greater Idaho Healthcare Coalition, the Bannock County Coroner’s Office is now the proud owner of a Mobile Morgue Trailer.

The trailer will be used regionally as a deployable asset for large-scale incidents that require a mass casualty morgue.

Coroner Torey Danner saw a need for a mass-casualty morgue during the Downard Funeral Home investigation. With limited resources in East Idaho, his office had to borrow a trailer morgue from the Ada County Coroner’s Office, which was greatly appreciated. 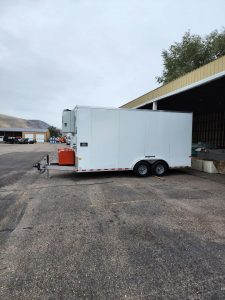 “I want this office to be self-sufficient, but I also want to be a resource for other counties in East Idaho,” said Danner. “The Ada County Coroner’s Office helped us when we needed it, and now we can pay it forward.”

The Mobile Morgue Trailer will serve all counties partnered with the Greater Idaho Healthcare Coalition, which encompasses the 5th, 6th, and 7th Health Districts (24 counties).

“I want to express my sincere gratitude for the Greater Idaho Health Care Coalition’s donation. This trailer will be a great asset for us and all of East Idaho and it wouldn’t be possible without their support,” said Danner.